The NAPE Theater will feature a presentation from a government affairs representative to inform attendees about federal regulations, reforms, and updates concerning the energy industry. 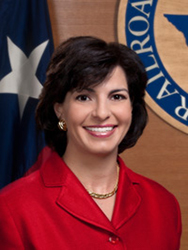 Synopsis: Commissioner Christi Craddick will provide an update on the regulatory landscape in Texas’ oil and gas industry. She will cover recent rulemakings, federal regulations and the state legislature’s involvement in the Railroad Commission’s jurisdiction and mission.

Christi Craddick is in the forefront of the newest wave of conservatives in leadership roles in Texas. Raised in a strong conservative household, retained as legal counsel by prominent Texas firms, and shaped by more than a decade as a trusted political adviser, Craddick has set a clear standard of integrity, self-reliance and innovation in her position as commissioner at the Railroad Commission.

Since her tenure on the commission began in November 2012, Craddick has pushed to maximize the effectiveness and efficiency of an energy industry that is driving the state’s unparalleled economic success. In the process, she has repeatedly proven that sensible regulations, careful listening and plain talk can foster innovation that has solidified Texas leadership in the energy sector.

Making it a top priority, Craddick has worked to educate the public about the oil and gas industry and its impact in Texas. She has fought against Washington’s one-size-fits-all environmental policies that would kill jobs and stifle energy production growth. Craddick has advocated for recycling in the oilfields, helping to drive the percentage of reclaimed water upwards — an essential achievement in a state enduring a multiyear drought.

As part of her efforts to modernize the agency, Craddick has championed an information technology overhaul at the commission, seeking improvements that would upgrade the geographic information system, increase public access to the agency’s data and speed up inspections and permitting times.

A native of Midland, Texas — the heart of the Permian Basin — Craddick earned both her bachelor’s degree as a Plan II graduate and her Doctor of Jurisprudence from The University of Texas at Austin. During her career as an attorney, she specialized in oil and gas, water, tax issues, electric deregulation and environmental policy.

Following the example of her father and mother, Craddick has been drawn to public service and politics. As president of a grassroots advocacy firm, she took the lead on work in coalition building in the public policy arena and development and implementation of issue strategies.

Craddick serves her community as an active member of organizations including the State Bar of Texas, University of Texas Liberal Arts Alumni Advisory Council and Dell Children’s Medical Center Foundation. She resides in Austin with her daughter, Catherine, and is an active member of St. John Neumann Catholic Church.