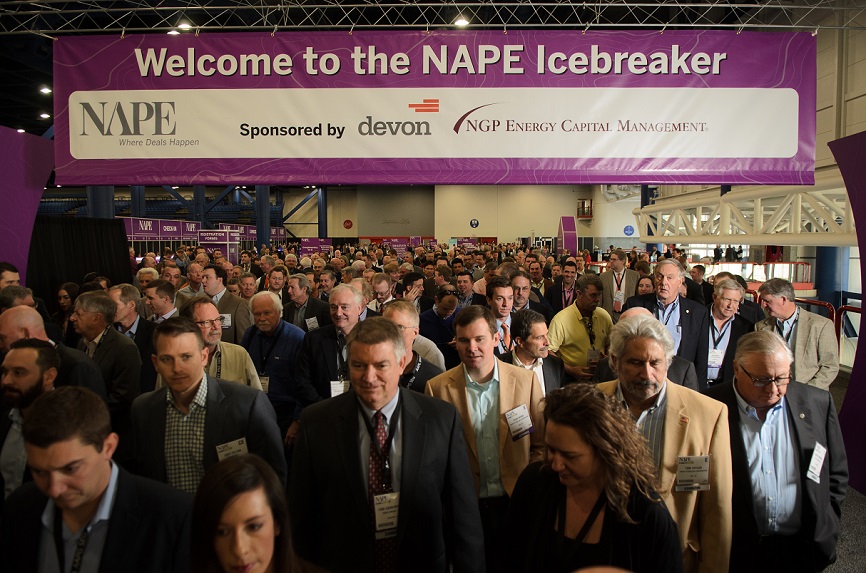 The 2016 NAPE Summit in Houston looked like it typically does — large crowds, a sprawling exhibit hall and hushed conversations that one always suspects are the sparks of future deals. What was striking is that amid the oil and gas downturn, one of Houston’s marquee events was well populated, with more than 11,300 people attending inthe face of acidic commodity prices and a steadily shrinking rig count. NAPE attendees — a microcosm of the oil and gas industry — are a resilient bunch. NAPE is not only “where deals happen,” but it is also the industry’s tough love seminar. It was founded during an industry slowdown more than 20 years ago for the purpose of jump starting drilling activity. Attendees said they were pleased to see so many people at the George R. Brown Convention Center, a strong sign of the industry’s determination to survive and its character. The common sentiment from attendees: We’ve been through this before; the industry will come back eventually. Beyond just hope, NAPE offered its usual doses of reality. EOG Resources Inc. Chairman and CEO William R. Thomas said that even as oil prices begin to rise, the independent will stand down production until the recovery feels solid. EOG will wait to make sure the market is in good shape, balanced and has a future, he noted. “We don’t want to ramp it up and drive the price of oil back down again.”

The hazards of deal making in thegreat down turn were also crystallized. EnLink Midstream LLC paid $1.55 billion for subsidiaries of Tall Oak Midstream LLC in January. By February, the company’s total market capitalization fell to just $1.3 billion, attendees noted. In addition, NAPE Summit saw its share of anger at President Barack Obama. The Independent Petroleum Association of America came out swinging against the White House’s proposed $10 per barrel tax and the Clean Power Plan to curb CO2 emissions. Dan Naatz, IPAA’s senior vice president of government relations and political affairs, said the organization filed lawsuits to stay the administration’s hand on regulatory matters, including the Department of the Interior’s mandates on hydraulic fracturing on public and American Indian lands. With much to talk about, the turnout was good “considering the downturn we’re in,” said Trevor Hull, president of Challenger Exploration LLC, who has attended every NAPE since 2005 and whose company usually has a booth. “We’re starting to see a lot of conventional opportunities being shown that will work at this price point,” he said. “The Texas and Louisiana Gulf Coast is definitely going to see a bit of a revival, and that is good for the smaller operators — they had a hard time competing with all the shale plays.” Phil Martin of New Century Exploration LLC said he has gone from selling prospects at NAPE to making acquisitions this time around. “This is such a good melting pot to talk to so many people,” he noted. With the challenge of low oil prices, some attendees said the industry is in hibernation now, while others described it as a period of incubation and waiting for better times. “We can sit tight until oil gets back to $35, but I hope it doesn’t stop there — although with the drop in service costs, it’s almost like conventional plays are more economic than unconventional ones,” Martin said.

On the Show Floor
NAPE continues to attract people from every facet of the industry, from legendary oilmen like Herbert Hunt of Petro-Hunt LLC to entrepreneurs in their late 20s who are starting to invest in oil and gas with the goal of building an E&P company. This year’s NAPE Summit also drew producerslarge and small from across the country and globe to the show floor. Despite the downturn, companies were ready to make deals happen and packed the exhibit hall with more than 11,300 attendees and 700 exhibit booths. New for 2016, the international booths representing opportunities in countries as diverse as Ireland and Australia were located on the main show floor rather than in separate adjacent aisles, as in the past. This greatly increased their traffic and opportunities to talk with business prospects. Another big success, for the first time, in NAPE’s 20-year history the Prospect Presentations included a full day of domestic and international presentations running concurrently in two separate theaters. To a packed room of potential buyers, 46 domestic and international companies showcased active prospects.

Beyond the Deals
Each year, NAPE gives back in the form of its NAPE Charities Luncheon, which this year featured former New York Mayor Rudy Giuliani, who addressed leadership traits in the industry, especially for executives dealing with a challenging environment. He also criticized federal policies that are impeding oil and gas development in America at a time of low oil and gas prices. “We should all be planning, when the market is going up, for the day when it will go down,” Giuliani said. “And when it goes down, you have to know it’s not going to stay down. … Don’t be afraid of the storm; this is what life’s about. It’s about ups and downs, and it’s the leaders who can get us through.” The NAPE Charities Luncheon continued its longtime tradition of supporting veterans’ charities, bestowing $75,000 each to Canine Companions for Independence, Operation Finally Home and Rebuilding America’s Warriors — for a total of $225,000.

Supply & Demand
EOG Resources’ Thomas was the keynote speaker during the NAPE Business Conference lunch. He said the U.S. industry’s inability to start and stop production on a dime makes it an unlikely successor to OPEC’s role as swing producer. So far, the U.S. hasn’t reacted fast enough to thwart its own production surge. “Some people seem to think you can turn the U.S. off and on like a light switch,” he said. “That’s not going to happen.” U.S. production didn’t fall as much as it should have in 2015, in part because companies were unwilling to curb spending,he said. Until supply and demand equalize, pumping more oil will only hurt U.S. energy companies by continuing the glut. Now — as in 2015 — it makes little sense to outspend cash flow in order to grow oil production, Thomas said. “Why do you want to destroy your balance sheet and grow oil at low oil prices?” he asked. Longer term, he is optimistic that oil markets will right themselves because global demand inevitably increases over time. Because of the dearth of new drilling today, the supply will tighten in the future and U.S. horizontal oil will be needed once again. He said future oil demand will come from the Arab Gulf states and U.S. shale plays’ light tight oil, even though the latter are more expensive to produce. The world no longer has an effective swing producer “because OPEC refuses to act and the U.S. cannot ramp up production as quickly” as some people would like to believe, Thomas told attendees. A return to a strong production mgrowth rate in the U.S. should start when oil is at about $60 a barrel. However, it will take 12 months or more to restore production growth of about 500,000 barrels per day, he said. The biggest holdup will be the oilfield service industry. “They’ve made a tremendous reduction in people so it’s going to take quite a while to get those people back in and get them back to the efficiencies we had before,” Thomas said. “We don’t think that will happen quickly. At EOG, for instance, we’re not going to ramp up production the first time oil hits $60; we’re going to make sure it’s real first.”