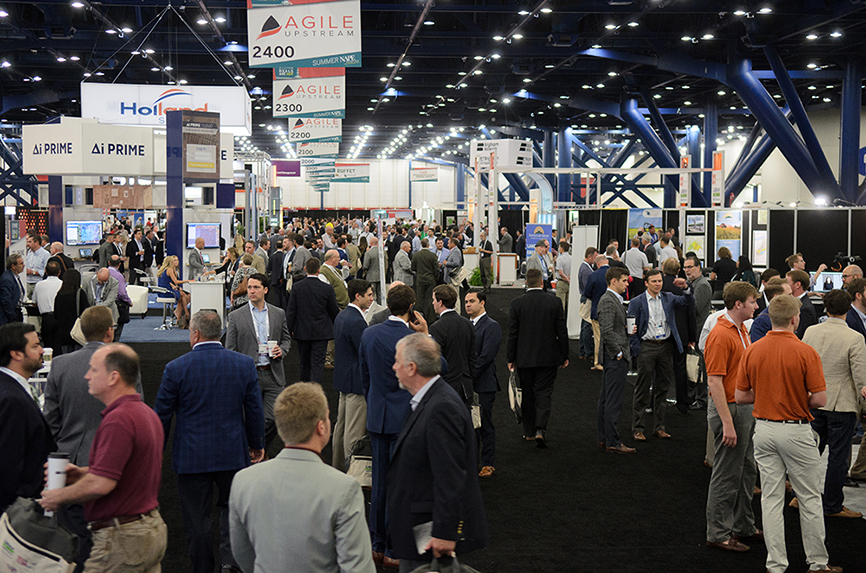 Summer NAPE energized the George R. Brown Convention Center in Houston, where oil and gas players big and small cut deals for exploration, development and production, and an energy advocate challenged the industry to speak up and take back the court of public opinion.

More than 2,800 industry executives gathered at the expo, which featured over 2.4 million prospect acres from 16 states.

“We saw another successful Summer NAPE with industry leaders coming together from across the country to sell and buy prospects, gain a better understanding of the state of the industry and continue to forge lasting business relationships,” said Jim Devlin, chairman of the NAPE Operators Committee.

Among those giving prospect preview pitches at the expo was Josh Cornell, vice president of land for Panther Energy Co. III, who presented a Louisiana Austin Chalk opportunity — the Bloodhound prospect — in Vernon and Beauregard parishes.

The Bloodhound prospect is an extension of Masters Creek Field.

Brookeland North’s average oil production is 97,947 bbl and Brookeland South’s is 168,386 bbl compared with 348,231 bbl from Masters Creek, according to information handed out at the company’s booth.

But there are some challenges.

“Our unknown is what water contribution we’re going to get from the fractures,” said Paul Richardson, vice president of geology for Panther Energy. “Our knowns, though, are a trend with wells that produce fairly well: 8-to-1 water ratio. But it’s real easy to get rid of the water here.”

Richardson added that “drilling might be tough with the fractures,” but 320-plus laterals have been drilled in Masters Creek. “So we know it can be done.” Plus, being in an overpressured oil window works to an advantage, he said.

Other companies pitched investment opportunities for acreage in South Texas, the Gulf Coast region, the Michigan Basin, the Rockies, California, Alaska and the Anadarko Basin.

The latter included a pitch from Trueblood Resources on a 24 MMbbl oil potential, multizone Oswego-Cherokee farmout in Oklahoma. The 5,000-acre lease position featuring Pennsylvanian-age carbonates was described as geologically well-defined with more than 3,000 wells evaluated, with moderate drilling depths between 7,200 and 8,200 feet and an estimated completed well cost of $2.3 million.

The company also sought a partner for its chemical EOR project, which Trueblood Resources President John Trueblood said would start in fourth quarter 2018 or in early 2019.

“The average well at least in the Oswego is going to be about 300,000 barrels. So it’s very cost effective,” Trueblood said during his presentation. “We’ve done an extensive amount of our own geochem work in the Pennsylvania source rock. It’s just a very, very rich section.”

The company plans to spend about $10 million and has three drill-ready locations in the Oswego play, he said. Under the farmout terms, an investor could earn 640 net acres by drilling one horizontal test with 25 percent after payout interest retained. There was also an option to drill more wells and earn interest in the 5,000-acre lease block.

He described Trueblood Resources as a small, family-owned company focused on the Anadarko Basin. But Oklahoma’s Oswego Formation has also attracted some bigger players, such as Chesapeake Energy.

“Oswego volumes continue to climb with average 30-day production rates of 1,015 boe per day and over 80 percent oil cuts,” Chesapeake said in a recent earnings release.

Chesapeake is testing advanced completions and longer laterals across its Mid-Continent position.

Getting the message right

HBW Resources Managing Partner David Holt challenged pro-energy groups to speak up and take back the court of public opinion during his 50-minute talk at the Summer NAPE Business Conference. Holt’s firm provides energy companies with counsel and guidance on governmental and energy industry initiatives.

“Put them on their back feet,” he said. “They don’t have a solution to meeting our energy needs.”

Holt said HBW is tracking 2,000 anti-energy advocacy groups, which are taking on issues such as pipelines, offshore drilling and hydraulic fracturing. He said these active campaign efforts are designed to thwart energy development.

Meanwhile, the industry only has about 100 organized efforts promoting energy.

“So this notion of the big bad oil and gas industry outspends, outmaneuvers, outhustles the anti-energy faction, that is not true,” Holt said. “By our reckoning, between these 2,000 different groups, about $600 million will be spent on anti-energy and related campaigns in 2018. The oil and gas and broader energy industry is not spending that much.”

That is why it is so important for the pro-energy sector to get out and have their voices heard to influence November’s elections, he added.

“If I’m a Democratic member of Congress and I understand that the demographics of my community are 30 percent at or below the poverty level, opposing sensible energy policy is not something I really want to do,” Holt said. “The fastest way to put disposable income back into someone’s pockets is to keep energy prices low.”

Holt, who predicted that Republicans should either maintain or add seats in the Senate but could lose some ground in the House, said President Trump and his administration have been good for the energy industry.

“Trump — who frankly is not a Republican or a Democrat, he’s a Trump — sees this as a way to create jobs, to create swing voters who support him and his administration and to create economic opportunity. It’s really about those forgotten Americans, that working class, those labor unions and other groups in key states — Ohio, Pennsylvania, Wisconsin. The states that without winning those states Donald Trump would not be president today,” Holt said.

“He is going to continue to promote energy policy that expands our opportunity for all energy, primarily oil and natural gas, but look for ways to get more working class Americans back to work.”

Holt encouraged attendees to not be afraid to debate anti-energy voices and to do so with the facts.

Anti-energy groups are wrapping their cause into the environmental cause, but everyone is in favor of keeping the environment safe and clean, he noted.

Holt challenged those in the audience, when they are debating anti-energy people, to ask about their solution to solving the energy issue.

“The discussion needs to be on energy solutions,” he said. “What are we doing to meet the needs of this family, of this community, of society at large to create jobs? They need to come to the table on energy solutions. If we do that, that’s a debate worth having for the nation.”